By the time you read this, the North Bay could be awash in abundant winter rain, its reservoirs filling rapidly and groundwater being vigorously recharged. But maybe not. The rain gods might be holding back on meaningful precipitation once again, setting us up for a fourth straight year of severe drought.

Six months ago, the State Water Resources Control Board approved emergency conservation regulations that require all urban water suppliers to step up conservation measures and enforce prohibitions on wasteful water use. In response, most North Bay cities and communities quickly rolled out restrictions on the hours when irrigation may take place, banned the washing down of driveways and sidewalks, and were given authority to fine property owners whose excessive watering habits result in runoff and overspray. Nearly everyone was asked to reduce water consumption by at least 20 percent. By September, many lush green lawns had turned the color of straw, while others had been creatively converted to xeriscapes requiring little or no irrigation.

Efforts have been underway for years (between multiple water and sanitation agencies, engineers and consultants in the North Bay and beyond) to ensure the future of our drinking water supply. No matter how much rain falls here this winter, lessons learned during the last prolonged drought nearly 40 years ago will continue to impact current and future water conservation measures.

As we’ve all been made aware, groundwater is scarce in many parts of California. Groundwater, which makes up nearly all of the available fresh water on our planet, is the water source for 13 million households on private wells in America, according to the National Ground Water Association. Most of the nation’s more than 40,000 community water systems are supplied by groundwater, and across the country, groundwater is used by agriculture at the rate of 53.5 billion gallons per day.

The pumping of groundwater in California had been free from regulation until recently, when Governor Jerry Brown signed the Groundwater Sustainability Management Act, which takes effect in January 2015. “The historic nature of this signing cannot be overstated,” said Lester Snow, executive director of the California Water Foundation, to the media at the time. “California’s limited approach to groundwater management has been a concern for a long time, but the drought has drawn renewed attention to this increasing problem.”

Snow’s foundation claims groundwater is used to meet approximately 40 percent of the state’s water demands in an average year and up to 60 percent or more during drought years. Before the legislation became law, California was the only state in the nation without comprehensive statewide groundwater management programs, and property owners were able to pump as much groundwater as they desired without oversight.

“If you look back to the last drought in our region, in 1976 and ’77, it was really severe,” says Grant Davis, general manager of the Sonoma County Water Agency. “Our response to that was to put into place some major water conservation measures that changed the behavior of the entire region. We then built Lake Sonoma, which now supplies water to more than 600,000 people.”

Additionally, the Russian River water supply system, managed and operated by the Sonoma County Water Agency, supplies water to about 80 percent of north Marin County and Novato customers and approximately 25 percent in the rest of Marin.

Lake Sonoma provides the lion’s share of the region’s water needs with multiyear carryover storage, says Davis. He points out that, in 1977, the only reservoir in the region (before Lake Sonoma) was Lake Mendocino. “So it’s really important to remember that while there are now some cutback measures going on statewide, by using smart strategies learned back in the 1970s, we’re better equipped here to make it through these multiple-year droughts. We’ve built a conservation ethic into our water management in this region. That’s why we’re now better off than other parts of the state.”

Yet with surface and groundwater supplies being rapidly depleted, more needed to be done to stretch water supplies.

“All up and down the state, people began to recognize that this is California, with a population of more than 38 million. Our limited water resources aren’t able to accommodate that many people and their multiple demands on the resource,” says Ginger Bryant, program development consultant for the North Bay Water Reuse Authority (NBWRA), a coordinated effort between Sonoma, Marin and Napa counties and 10 water and sanitation agencies working to address water supply shortages from a watershed perspective. NBWRA administers the North Bay Water Reuse Program (NBWRP), a series of existing and proposed pipelines designed to supply recycled water largely for crop irrigation and landscaping and to restore tidal wetlands and wildlife habitat (see “Purple Pipelines Carry Recycled Water,” below).

Recycled water is former wastewater (sewage) that’s been treated to remove solids and impurities. The wastewater is sent from homes and businesses through a pipeline system to a treatment facility, where it’s treated to a level consistent with its intended use. The treated water is then routed directly to a recycled water system, through purple-colored pipes, so it’s used more than once before passing back into the natural water cycle.

“This collaboration of multiple agencies is cutting-edge for the nation,” says Davis. “We’ve coordinated infrastructure projects that expand the use of recycled water in lieu of fresh water. The goal is to put the water molecules to work more than once and to not discharge into San Francisco Bay. It’s stretching existing supplies of water farther to meet current needs.”

Davis says that, while recycled water can provide some economic opportunity for growth, he doesn’t want to use lack of water as the limiting factor for growth. “Land use issues and other factors would have more impact.”

Bryant adds that there could be some growth that occurs as a result of having a more resilient water supply, “but the purpose of the pipelines isn’t to help facilitate that growth. It’s not in anticipation of growth at all. If you make recycled water available for agriculture, then groundwater isn’t being pumped. So it’s not a direct cause-and-effect that if you bring in recycled water you can build more housing, for instance. Regardless of whether a community is growing or not, recycled water helps take the pressure off the demand for fresh drinking water.”

Phase 1 of the North Bay Water Reuse Program has been under construction for five years and is comprised of $104 million in projects. Now at 65 percent completion, it includes foundational infrastructure for treatment, storage and distribution of recycled water. Phase 1 projects deliver this high-quality water for parks and landscaping, premium wine grape production and restoration of tidal wetlands and wildlife habitat.

Phase 2, now in the planning stage, is estimated at $150 million in projects. These will build on Phase 1 infrastructure by increasing storage and distribution, supporting groundwater management and environmental and community benefit projects––all by providing high-quality recycled water throughout the North Bay. When fully implemented, Phases 1 and 2 will yield 30,000 acre-feet per year of recycled water, says Bryant. (An acre-foot is the volume of water necessary to cover one acre to a depth of one foot, equal to 43,560 cubic feet or 325,851 gallons.)

Building resiliency into the supply 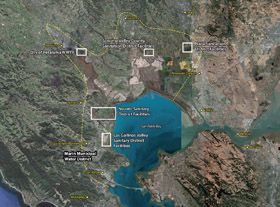 With so many North Bay agencies working together, it’s been easier to secure federal monies for these projects. The U.S. Bureau of Reclamation has provided 50 percent of the funding for the Phase 1 engineering, feasibility studies and environmental impact report, as well as more than $18 million in construction grants. Additional funding, approximately $6.5 million, has come from the California Department of Water Resources’ Proposition 84 grants. Local agency funds have been used to make up the balance.

NBWRA was formed to work for the benefit of the region, says Bryant. “And that’s what we did in Phase 1––delivered the planning documents and construction funding that let all the member agencies build more than $100 million in recycled water infrastructure projects.”

All of the water for the NBWRP comes from the North Bay region, according to Bryant. “Our projects are all staying within the North Bay watershed. We’re not taking it from or delivering it to anywhere else.”

She emphasizes it’s a qualify-of-life issue for communities to use recycled water in areas where it’s not appropriate to use drinking water. “By building resiliency into the water supply, the region can better manage drought and not go through those significant ups and downs based on weather and annual precipitation. It’s all about building resiliency into the region’s water supply. If we’re doing our job, nobody will feel any change.”

“With the water reuse program, we’re making investment strategies to stretch the supply we have before needing to take on more expensive projects that would cause huge spikes in water charges,” adds Davis.

Last spring, the Marin Municipal Water District (MMWD) briefly studied the feasibility of a permanent pipeline to bring recycled water from the East Bay across the Richmond-San Rafael Bridge. During the drought of 1976 and ’77, six miles of pipeline were installed on the bridge’s upper deck to deliver fresh water from the East Bay. It was removed in 1982. Discussions about a new pipeline have come up recently, but a spokesperson for the water district says its board of directors hasn’t taken any action to pursue it and it’s not on the agenda for any board meetings in the foreseeable future.

Meanwhile, some locations where water shortages are severe are looking at another alternative: highly treated wastewater that’s been cleaned so well (or purified using new technologies like reverse osmosis) it can be blended with groundwater and used for drinking water sources.

“That’s already happening in places like Orange County, two small communities in Texas that ran out of water last year and three towns in Arizona that are considering its use,” explains Mark Millan, principal of Data Instincts, a consulting firm coordinating communications for NBWRA.

This highly purified water first undergoes two levels of wastewater treatment and is then put through a series of processes such as microfiltration, reverse osmosis and ultraviolet light exposure so that it nearly matches—and, in some cases, exceeds—drinking water standards. A water district or utility in California would typically conduct an exhaustive environmental impact report first when considering going to this next level of water reuse.

“There are several utilities and cities in California that are planning to, or have already built, demonstration sites to show it can be safely done, including the Santa Clara Valley Water District, which supplies much of Silicon Valley’s water,” adds Millan. “So it’s not pie-in-the-sky stuff. It’s among what water planners are now considering in the portfolio of future options.”

The need for such drastic measures won’t be necessary anytime soon in the North Bay, says Brad Sherwood, principal program specialist in community and governmental affairs for the Sonoma County Water Agency. “Neither direct nor indirect potable reuse is in our water supply plan. One of our main messages is that our existing water supply system will continue to work and provide for us long into the future.”

Despite all the science and cutting-edge technology, Millan says the first solution to the problem of groundwater depletion—and any water scarcity—is simple conservation. “But that’s not going so well. People talk as if they’re cutting back and conserving, but most of them aren’t. The second solution is recycled water. The third option, if you’re by the coast, might be desalinated water. Beyond that, you’re doing rain dances.”