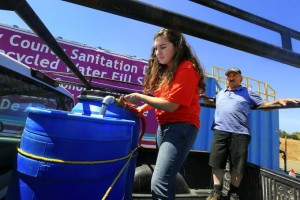 A new recycled water fill-up station opened in Sonoma Valley this week, becoming the second facility in the county where residents can go to get highly treated wastewater to irrigate their gardens and ornamental landscaping.

The drive-up station, located just north of the Sonoma County Sanitation District treatment plant, provides free recycled water for local residents to use on their lawns and vegetation, part of a push to expand the use of reclaimed water during the state’s prolonged drought.

John Petroni of Sonoma made two trips to the treatment plant Tuesday to get water for his trees, which he said need all the help they can get.

On his first visit he hauled off 50 gallons, followed by a second trip for 80 gallons.

“Redwood trees need a lot of water, and they are going to be very happy,” he said.

Highly treated recycled water is permitted by the state of California for use on a variety of plants and agricultural crops, including vineyards, fruit trees, vegetables, and herbs.

Using reclaimed water to offset the use of potable water has been employed for decades in Sonoma County, using pipelines that deliver recycled water to spray on vines, hay fields, soccer pitches and office parks, for example.

Reclaimed water from the Sonoma Valley plant has been used for years to irrigate vineyards in the Carneros region, totaling about 6,000 acres, according to Kevin Booker, a county Water Agency principal engineer.

But allowing residents to haul away the supplies from a treatment plant in Sonoma County was only recently approved by state regulators, beginning last month in Healdsburg. This week it got off the ground in Sonoma and is anticipated to begin in about a month at the county Water Agency’s treatment plant at 404 Aviation Blvd., near the county airport.

“Recycled water is a valuable resource that becomes even more important during this drought,” county Supervisor Susan Gorin, board chairwoman of the Water Agency, said in a statement. By making recycled water available, she said, it eases the burden on limited Russian River supplies and local groundwater.

Even though summer only has three more weeks on the calendar, hot dry weather typically extends into October on the North Coast.

“This is the most critical time of the year to save water. It’s a time when water is needed most for fish migration — coho salmon and steelhead trout,” Water Agency spokesman Brad Sherwood said Tuesday underlining the continued need to conserve.

The prospect of hauling quantities of reclaimed water can be a bit daunting, particularly because of weight. A gallon of water weighs eight pounds.

Residents who take advantage of the program have to bring their own sealable containers, ranging from one gallon up to 300 gallons.

The water is available from 10 a.m. to 3 p.m. Monday through Thursday, although depending on demand, the service may be expanded to weekends.

There is a small bit of paperwork involved for participants. Prior to receiving water, residents are asked to obtain an application and agreement online with the Water Agency, or pick one up at the fill station. Each participant is given a brief training in the use of recycled water.

They are forewarned that recycled water being dispensed is not suitable for drinking or food preparation and should not be placed in a storage container connected to a landscape irrigation system, nor a drinking water supply.

Booker said the water is high in plant nutrients such as phosphates and nitrates but low in salinity.

Residents who come to the Sonoma plant, located at 22675 Eighth St. East have to reside within the wastewater district boundaries, which include the city of Sonoma and stretch roughly from Glen Ellen to Schellville.

The water from the Aviation Boulevard treatment plant close to Santa Rosa will be available to all county residents.

Since the residential pickup program began a month ago in Healdsburg, about two dozen users have signed up. Of those, several make daily trips to get recycled water, according to Utility Director Terry Crowley.

Since starting in early August, the self-hauling landscape irrigation program has offset use of 47,000 gallons of potable water, he said.

Crowley said the program has allowed the Little League to establish a new turf planting program at the city’s baseball field.

“City staff has heard nothing but positive feedback regarding the program,” he said.

You can reach Staff Writer Clark Mason at 521-5214 or clark.mason@pressdemocrat.com. On Twitter @clarkmas.